Minnesota hockey hall of famer and consultant to NHL, NCAA and Olympic

teams writes "The myth of leaving home and advancing quickly"

TAHA posted this article on its website, and asked local associations to pass the word. Jack Blatherwick is a member of the Minnesota Hockey Hall of Fame, holds a PhD in sports physiology, and is a player training and development expert who regularly consults with NHL, NCAA and Olympic hockey teams. He has been a coach with the New York Rangers, Washington Capitals, two USA Olympic teams, and the University of Minnesota, among others.

The article addresses an issue that our association faces every year--players and parents who conclude that the grass is greener for their son somewhere else. TAHA has tried to address this by enacting the "play local" rule, which requires players to play locally unless the player is leaving to play at the highest level in the state, Tier 1. The rule reflects TAHA's view that hockey in the state is stronger overall if smaller markets like ours aren't constantly losing players to larger markets like Dallas or Houston and that families should stay together unless the kids are playing at Tier 1.

The rule has worked to some degree, but, still, ten former players in our association currently are playing peewee or above at a hockey academy out of state or one in-state that attempts to work around the play local rule. Some parents have moved their family for hockey, other parents have sent their son to live with another family. Some kids have done well; other families would take a do-over if they had the chance; some we'll have to see. Every parent wants the best for their kids and, just like decisions on where to send your kid to school or whether to pursue the science fair or band over competitive sports, they are not easy ones. It is not hard to see why the for-profit youth sports camp and academy industry is successful. Their sales pitch--your child is so talented that if only he or she could get the right coaching and training the sky is the limit--is so very seductive. But there are tradeoffs, and that's what the article addresses.

The Mistake of Leaving Home and Advancing Too Quickly 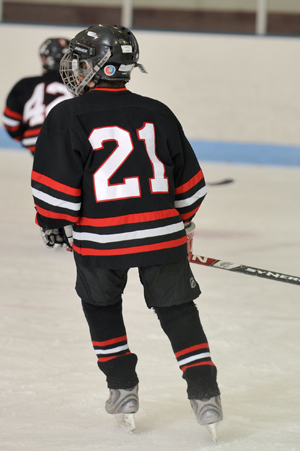 Freddy Adu, at age 14, was the brightest young star in American soccer. Featured on “60 Minutes” and “David Letterman,” Adu was signed by Nike in 2003 for $1 million. Many said he was the most skillful young player in the world. (Click here for more details.)

Today, at age 20, he’s bouncing around Europe from one professional team to another—not able to crack the lineup for those teams; not good enough to play for Team USA in the World Cup. What happened? Did he lack basic skills? Did he stop working at it? Did injuries slow his progress? No.

Actually, there was no progress. There was just a lot of time on the bench, because he wasn’t ready for professional soccer. He skipped the normal progression, never learning the game by trial and error—and especially, by trial and success.

To quote Tim Howard, the veteran U.S. goalkeeper, “Adu has skills with the ball that not many, if any, American players possess.” But insiders say he “plays too young.” He hasn’t developed awareness, anticipation, creativity, poise and mental toughness—the most important skills in every team sport.

In professional soccer, the pressure to win leaves little playing time for a talented youngster who has a lot to learn. Unfortunately, the situation is no different at any level of ice hockey, even youth hockey.

If, like Freddy Adu, a talented young hockey player moves up to the next level too quickly, he will play a diminished role. As a third or fourth line player, he will be given a short leash and lower expectations. “Dump it in from the red line, forecheck, backcheck, hustle, and above all, get off the ice quickly.”

On the other hand, if that same youngster would stay with his age group, he’d score goals, make creative plays, learn to control the puck in traffic instead of passing it too quickly, gain poise, and confidence, and emulate Sidney Crosby, Alex Ovechkin and Patrick Kane.

Ovechkin scores goals—not because he has superhuman physical abilities—but because he EXPECTS to score whenever he steps on the ice. He is passionate about scoring, because he always has. Or…is it the other way around?

Development of a goal-scorer requires raising expectations to score, and this won’t happen if there is a rush to the next level. The status of making the PeeWee A team instead of dominating at the B level, or advancing prematurely from high school to the USHL, or college to the AHL, often results in a diminished role on the third or fourth line. This automatically creates a lowered expectation for scoring.

There is nothing wrong with a future as a checking forward, of course, if that’s what you have in mind when you move up prematurely. No doubt, some players are ready and will have success, but for many more it is a mistake. The rule for goal-scorers might be: do not make the move simply because you can; do it because you are ready to dominate and score tons of goals at the next level. Or be prepared to play a different role in the future.

Sidney Crosby is a brilliant, confident playmaker, because every year of his life, that’s the role he played. Hypothetically, if at 16 years of age, he had advanced to professional hockey, where winning was more important than Sid, he might have ended up like Adu. Instead, he went to Shattuck, and dominated hockey games the way he does today.

Technical skills without tactical awareness will always produce a shallow hockey player, but Crosby made good decisions about developing both at a reasonable pace. On the other hand, Adu was the most skillful soccer player in the country at age 14, and stopped progressing at age 15. He missed opportunities to dominate games; he didn’t play unstructured pickup soccer with his friends. He didn’t develop confidence, poise, creativity and tactical playmaking abilities, simply because he was never able to play like a 15-year-old.

Editor’s Note: Thank you to by Jack Blatherwick, who has worked with several NHL clubs and Olympic teams, for sharing this story.