Wearing the Stripes and Calling the Shots 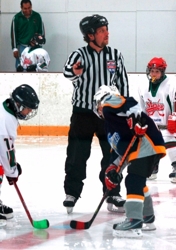 On Ice Officials do a lot more than just drop the puck. Want to learn more about becoming a referee? There's a link for that! (Click on the photo above.)

Hockey has a variety of different offenses that can be committed by players or even coaches. These can play a major role in the how games are played as penalties result in a team having to play shorthanded giving the other team a significant advantage in manpower on the ice and usually an excellent opportunity to score goals. Below are the general types of penalties as well as an explanation of some of the more common calls you'll see in games as well as the signals the referee or linesman will use to signal them in a game.

Types of Penalties:
Minor Penalty Any player, other than a goaltender, shall be ruled off the ice for two minutes during which time no substitute shall be permitted. If the shorthanded team is scored upon before the two minutes elapse, the player in the penalty box is automatically released.
Major Penalty Any player, except the goaltender, shall be ruled off the ice for four or five minutes during which time no substitute shall be permitted. The player who is serving the major penalty must stay in the penalty box for the full five, regardless if a goal is scored upon their "shorthanded" team.
Goaltender's Penalties A goaltender shall not be sent to the penalty box for an infraction, but instead the minor penalty shall be served by another member of his team, who was on the ice when the infraction was committed.
Penalty shot No time served. Awarded for a player being fouled from behind and denied a breakaway scoring opportunity. Also called for deliberately displacing the goal post during a breakaway, or can be called when a defending player other than the goalie intentionally falls on the puck, unusually around the defensive net area.
Coincidental minor and/or major penalties result when players of two opposing teams are simultaneously assessed penalties of equal duration. In this case, the players may be substituted for, but all penalized players must serve their full time in the penalty box and wait for a stoppage of play to come out of the box. Generally, the timekeeper will not post these penalties on the scoreboard and the players will be required to stay in the box for the amount of time assessed and until "the next whistle".
Misconduct Penalty Any player, other than the goaltender, shall be ruled off the ice for a period of ten minutes. A substitute player is permitted to immediately replace a player serving a misconduct penalty. A player whose misconduct penalty has expired shall remain in the penalty box until the next stoppage of play. These penalties are often called in tandem with a minor penalty and you may hear it referred to as a "Two and ten". What this means is that the player has committed a foul such as Checking from Behind and his/her team must play shorthanded for 2 minutes but the offending player must then also stay off the ice for an additional 10 minutes. Generally, a team will put two players in the penalty box with one coming out after two minutes.
Match Penalty A match penalty involves the suspension of a player for the balance of the game and the offender shall be ordered to the dressing room immediately. A substitute player is permitted to replace the penalized player after five minutes of playing time has elapsed.

Game Misconduct A penalty that involves the suspension of a player for the balance of the game. A substitute is immediately permitted to take his place on the ice. 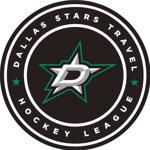 League Members (who we play)

The purpose of this Guidebook is to assemble pertinent documents and rules established by TAHA that may not currently be in the USA Hockey Annual Guide.

Checking (shoving) an opponent so that he is thrown violently against the boards.

Official Signal: Pounding the closed fist of the non-whistle hand into the open palm of the other hand.

Checking or hitting an opponent whose back is facing you, often into the boards.

Official Signal: Non-whistle arm placed behind the back, elbow bent, forearm parallel to the ice surface.

Taking more than three skating strides prior to checking an opponent.

Official Signal: Rotating clenched fists around one another in front of chest.

Hitting an opponent with both hands on the stick and no part of the stick on the ice.

Official Signal: A forward motion with both fists clenched extending from the chest.

Using an elbow in any way to foul an opponent.

Official Signal: Tapping the elbow of the whistle hand with the opposite hand.

When a referee signals that he is about to penalize a player, but will not stop play until the team to be penalized touches the puck.

Official Signal: The non-whistle hand is extended straight above the head.

Called when a player uses his hand to direct the puck to another player from the same team in the offensive or neutral zone. Hand passes are allowed in the defensive zone.

Official Signal: The non-whistle hand (open hand) and arm are placed straight down alongside the body and swung forward and up once in an underhand motion.

Holding an opponent from moving with hands or stick or any other way.

Official Signal: Clasping the wrist of the whistle hand well in front of the chest.

Striking your opponent while carrying the stick above shoulder level.

Official Signal: Holding both fists, clenched, one immediately above the other, at the side of the head.

"Hooking" a stick around an opponent to try to block his progress.

Official Signal: A tugging motion with both arms, as if pulling something toward the stomach.

Illegal body contact with an opponent who is not in possession of the puck, or knocking an opponent's fallen stick out of his reach.

Intentionally shooting the puck from behind the center red line over your opponent's goal line. Not technically a penalty, icing results in a faceoff in the offending team's zone.

Official Signal: The instant that the conditions required to establish "icing the puck'' have occurred, the referee will blow his whistle to stop play, and raise his non-whistle hand over his head. The back official will move to the resulting face-off spot and give the icing signal.

When an attacking player has been clearly pulled down preventing a breakaway shot on the goalie.

Stabbing an opponent with the point of the stick blade while the stick is being carried in one or both hands.

Official Signal: A single jabbing motion with both hands together, thrust forward from in front of the chest, then dropping hands to the side.

Official Signal: One chop with the non-whistle hand across the straightened forearm of the other hand.

Using a stick, knee, foot, arm, hand, or elbow to cause an opponent to trip or fall.

Official Signal: Strike the side of the knee (non-whistle side) and follow through once, keeping the head up and both skates on the ice.

Official Signal: Both arms swung laterally across the body at shoulder level with palms down.